Whitelaw Reid was born on October 27th 1837 in Xenia, Ohio, U.S.A. and died in London, England on December 15th 1912 aged 75 years. He was Editor in Chief of the New York Tribune and eventually became its proprietor.  As a politician, he was a prominent Republican and served on the Peace Commission for the Spanish American War.  In 1892 Whitelaw Reid stood as the Vice Presidential candidate on the Republican ticket alongside President Benjamin Harrison.  They were unsuccessful. However, soon after this Whitelaw Reid was appointed Ambassador to France and then to London where he died on Sunday 15th December 1912. 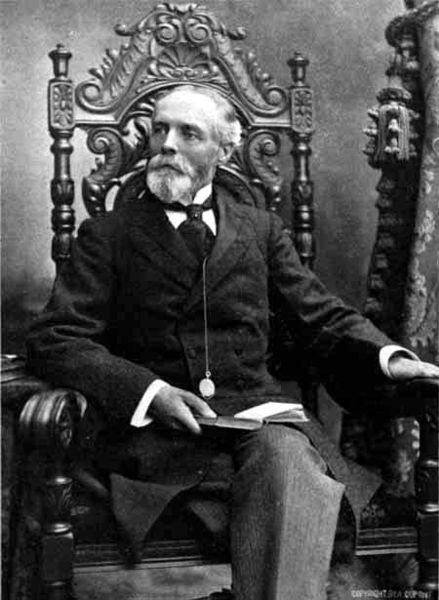 During the following week arrangements were made to convey the Ambassador’s body back to the U.S.A. 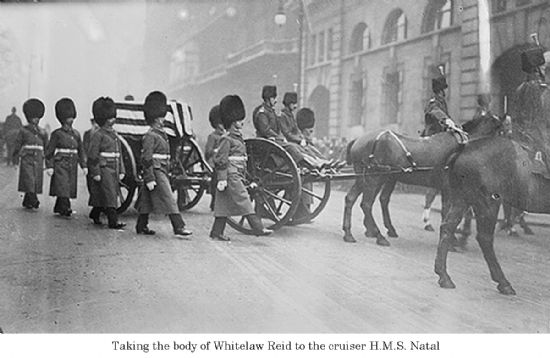 Cutting in the Author's Collection

This was widely reported in the British press and the following short article is from the Cheltenham Looker-On of Saturday 28th December 1912. 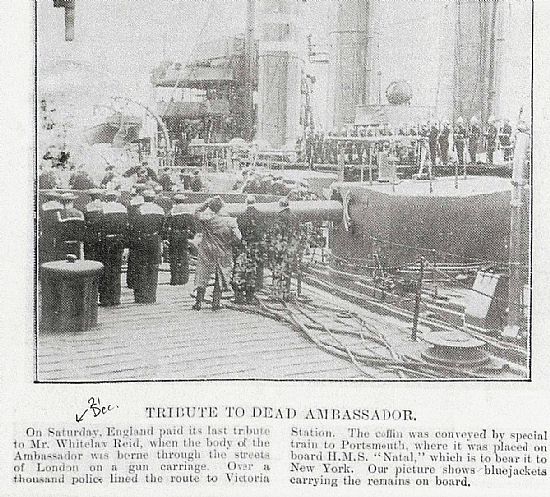 From the Cheltenham Onlooker 28 December 1912

Cutting in the Author's Collection

H.M.S. Natal arrived in New York on Saturday 4th January 1913 and again this was widely reported in the British press.  The following example is from the Western Times of 4th January 1913.  The article is a straight report from two news agencies and gives no hint about how difficult the crossing really was.

The Late American Ambassador
New York, Friday
The British cruiser ‘Natal’ conveying the remains of the late Mr Whitelaw Reid is due to arrive here at dawn, and will anchor in the North River.  The funeral will take place at one o’clock, the service being held in St John’s Cathedral. The officers of the ‘Natal’ have been invited to Washington on Sunday as the nation’s guests.
Central News

American warships have picked up, and are now convoying H.M.S. Natal with the body of the late Mr Whitelaw Reid, to New York.  They will arrive at their anchorage at ten o’clock.  When the warships met the customary salutes were omitted.  These will be fired when the vessels anchor.
Reuter 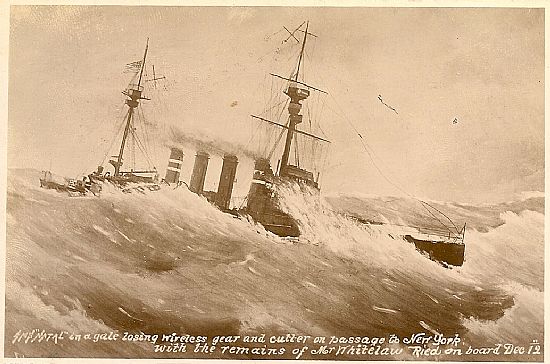 Artist impression of HMS Natal in the storm of 12 December 1912.  This is a contemporary image.

However the first indication of the difficulties that the Natal was in during this crossing emerged in a New York Times article of Wednesday 8th January 1913.

GUNS BROKE LOSE ON NATAL
Plates stove in on her terrible trip with Reid’s body – held for repair
The British Cruiser Natal which brought home the body of Ambassador Whitelaw Reid will remain in port two weeks to repair the damage she suffered on the passage from Portsmouth.  The crew is painting the ship’s hull, repairing top masts and gear, and Cleaning up the ship generally, while armourers are re-bending two plates on the starboard bow that were smashed in by the furious seas.
According to stories told by the officers and men yesterday, the cruiser almost went to Davy Jones’ Locker on the night of December 23rd, when she was two days from the Irish coast.  The North-west gale blew 90 miles an hour, and seas rose above the fore top, crashing down on the decks and giving the ship a list of 40 degrees to port, which jammed the men of the watch below, who were sleeping in their hammocks, against the deck above their heads, and kept them in that position, much to their alarm.
The sudden lurch to port was caused by two guns breaking loose.  Two searchlights were smashed, a cutter was from the davits away into the sea to leeward, the fore and maintop masts were broken off, and the wireless apparatus was carried away.  AT midnight, the Natal was hit on the starboard bow by a mountainous sea, which stove in two of her plates and let water into her lower decks in tons.  Capt. Greatorex thought of turning the ship and running back to the Irish coast to refit, but was advised not to try the experiment by Lieut. Hall, a Naval Reserve officer from the Merchant Marine who had served in the Atlantic trade.  He said that it woukld be fatal to make such an attempt in such a heavy beam sea. The speed of the Natal was reduced to 7 knots instead of her usual cruising speed of 16 knots.  The seams of the quarterdeck were opened up by the strain, and the water leaked in through so much that the officers had to sleep in their oilskins.  Necessary repairs were made and Christmas day brought some decent weather.
When Natal arrived off the coast of Newfoundland on Monday December 30, the Captain wanted to enter the harbour of St John’s and refit before coming onto New York, but it was foggy, and he had to ‘carry’ on as they say in the Navy.
The Natal belongs to what is called in the British Navy, the Particular Service Squadron, ships of which are always detailed for services similar to the Natal’s present errand.  The Natal will probably escort King George when he pays his visit to Canada next year.  The ship carries a crew of 600 officers and men.”

The reports of the damage were widely reported in British newspapers and in many cases quoted Reuters reports.  An example of this is taken from the Western Times of 9th January 1913.

On Her Beam Ends

New York, Wednesday
H.M.S. Natal is remaining here for a fortnight, in order to repair damage which she sustained in a gale, while conveying across the Atlantic the remains of the late Mr Whitelaw Reid.  Some of the vessel’s plates have been buckled by the heavy seas and her masts were damaged.  The buffeting that the ship received also resulted in some of the guns being loosened.
According to the New York Times, members of the “Natal’s” crew state that the vessel nearly foundered on 23rd December when she encountered a gale blowing at ninety miles an hour.  The vessel was thrown on her beam ends, two of the guns broke loose, the search lights were smashed and a cutter was blown away.  The top masts were broken off, and the wireless apparatus was carried away, two plates on the starboard bow were blown in and the lower deck was flooded.  Speed was reduced to seven knots.  Seams in the quarter deck opened and water leaked into the officer’s quarters compelling them to sleep in oil skins. 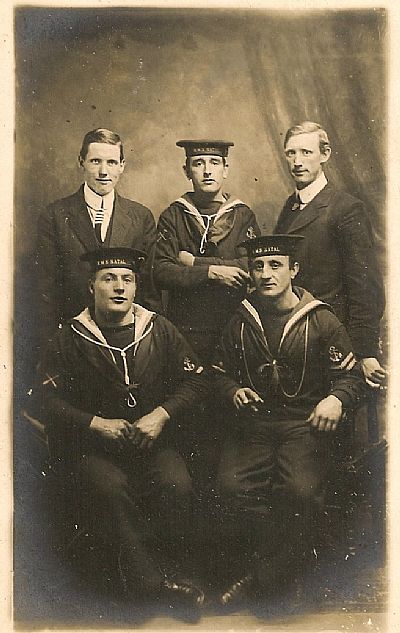 Carte de visite of three HMS Natal crew and two civilians taken in December 1912 in New York City.  This picture was almost certainly taken when HMS Natal was in the dockyard being repaired after the storm.

The alarming report sent from New York on Wednesday of the experience of the Natal on her journey across the Atlantic with the body of Mr Whitelaw Reid is stated to have been very exaggerated.  The “Daily Telegraph’s” New York correspondent says: It is true a couple of pins got loose during the rough weather, but this defect was soon remedied, and as the guns themselves remained perfectly intact and safe there was no necessity for the crew to secure them.  No plates were stove in and the deck seams were not opened.
Such repairs, as were necessary, have been undertaken by the crew and impose no special tax on their skills.
During the entire trip the coffin, containing the remains of the Ambassador, rested on the Cruiser’s foreshelter deck and even the wreaths placed there were not seriously disturbed.  The cruiser, yesterday, save for her dismantled top-gallant masts, looks almost as spic and span as when she left England.

These are interesting conflicting reports and it could be speculated that the Daily Telegraph report was an example of spin.  These were the times when The Royal Navy was seen as virtually infallible and any report of a less than perfect trip would have been seen as losing face.  With this in mind it is also interesting to consider the very low key reporting of the return of the ship to British waters.

The Western Times of Tuesday 28th January 1913 reported the return. Note this was nearly three weeks after the reports of the damage.

The armoured cruiser “Natal”, Captain O. Greatorex, which left New York on January 16th on her return voyage after conveying the body of Mr Whitelaw Reid, the late American Ambassador, to New York for internment arrived last evening at the Nore.  The “Natal” will go to Chatham where she will undergo her annual refit.

Was this a routine maintenance refit or a major repair?