The Launch of HMS Natal

Towering over the red brick terraced streets of Barrow in Furness are the six white buildings of the Bae Solutions Submarine Construction Facility.  These workshops are today’s reminder that the town has a long and proud tradition of ship building.

The modern submarine construction workshops are built on reclaimed land.  This land was once the Devonshire Dock, one of the two main ship building areas along the shore.  The Devonshire Dock was the first dock to be built in Barrow to export iron ore from the newly developed iron mines in the Furness district.  The building of the Devonshire Dock commenced in 1863 and was funded by the Furness Railway Company, who controlled the iron ore industry and the railway transport in the area.  At the time Barrow was in a detached northern portion of Lancashire close to the Lake District.  Today the town is in the southern portion of Cumbria. 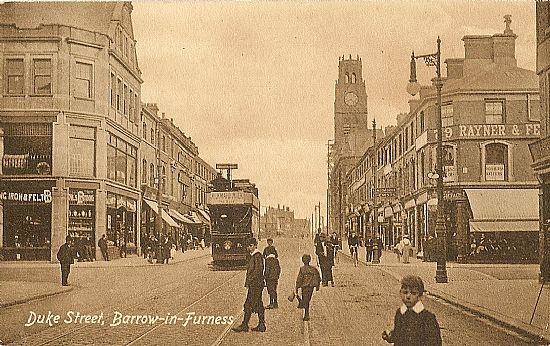 Barrow in Furness around the time that HMS Natal was built.

By the end of the nineteenth Century a further dock, the Baccleugh Dock was excavated and ship building had started.  The Ship building was dominated by one company, Vickers and Co., who developed the town as their business grew.  Around 1900 Vickers built a “model town” for their workers across the water on Walney Island and they named it Vickerstown.

During the next century the Barrow in Furness ship building docks were bustling hubs of engineering.  Many capital ships and smaller vessels, were built for the Royal Navy as well as many ships for navies from other parts of the world. 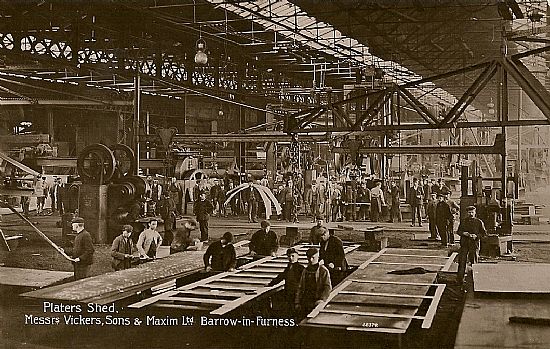 A view in one of the Vickers and Sons and MaximsLtd sheds at around the time that HMS Natal was built.

It was a brilliant sunny morning on the 30th September 1905. The streets of Barrow were lined with bunting and excited onlookers.  A company of dignitaries made their way, by carriage, from the railway station to the ship building yard of Vickers and Maxim.  There was great excitement because this was the launch day of another great ship.  As the carriages proceeded through the town, the people cheered and jostled to get a better view.  Policemen lined the pavements and ushered back the small boys who tried to break into the road.

Soon the party arrived at the gates of the yard and the made their way to the podium after a suitable period for refreshments.  The launch of the ship was imminent.

The new ship was to be launched and named by the Duchess of Devonshire, who was accompanied by the Duke. There were many other dignitaries on the podium both from Britain and abroad.  These included The Hon. Victor Cavendish, who was not only Financial Secretary to the Treasury, but was also the Duchess’ nephew.  Colonel T. E. Vickers, as the Chairman of Vickers Maxim, represented the company.  Lord Muncaster was there as Chairman of the Furness Railway Co., who had transported everybody to Barrow on that morning.  Most importantly, a member of the platform party was Sir William Arbuckle, the Agent General for the Province of Natal.  He was accompanied by his wife and daughter.

Once the guests were ready and the ceremony was about to start, several of the platform party turned to quieten the crowd of onlookers.  There was silence and the Duchess moved up to the launch mechanism.  She pulled the ribbon and the bottle of champagne swung against the ram of the ship.  The bottle failed to break and swung in the air for a moment.  Luckily, Mr J.H. Boolds, the Shipyard Manager, quickly realised what had happened.  He caught the bottle and swung it strongly towards the ship where it smashed against the hull.

“I name this ship NATAL and may God bless all who sail in her.” Intoned the Duchess.  This was the signal to the shipyard workers to remove the chocks that held the ship on the slip way and send the ship into the water.  H.M.S. Natal was launched to a rousing three cheers from the crowd.

The Launch of HMS Natal.

Besides members of the aristocracy and representatives of the Government, there were several other official guests on the podium who reflected how important the Royal Navy was seen in a world-wide context.  These guests included the Bolivian Chargé d’Affaires, who was invited because a cruiser was being built for his country on the slip way next to Natal.  The Netherlands Chargé d’Affaires and the Danish Minister also attended.  There were two representatives of the United States of America Navy, an Admiral and a Captain as well as five Captains representing the Imperial Japanese Navy.

The Japanese Navy had been invited because some years before, Vickers Maxim had built the great battleship Mikasa.  This ship had become the flagship of Admiral Togo when the Japanese fleet decisively beat the Russian Fleet at the Battle of Tsushima on 26th May 1905.  Mikasa was the centrepiece of the Imperial Navy celebrations that were to be held at Sasebo Naval Dockyard on the 10th September 1905, just three weeks before the launch of H.M.S. Natal.  Fire broke out, on board the Mikasa, and quickly spread to the after 12inch magazine.  The ship blew up and sank with a loss of 599 lives.  The Japanese Captains would have only just received the news of this disaster.  Little did they know that just over 10 years later, H.M.S. Natal would share a similar fate.

Great Britain prided herself at the start of the 20th Century with the size and power of the Royal Navy.  The Navy was the symbol of the greatness and power of the country and its growing Empire.  The launch of a new capital event was a matter for national pride and celebrations and was extensively reported in the Press.  In those pre radio and television days the newspapers were the main source of learning about the news and even small local papers carried syndicated national stories.

The first indication of the launch of the new ship was a series of notices in the “Court Circular” columns of the papers.  These columns were the way that ordinary people were informed about the comings and goings of the celebrities of the day.  A good example of such a notice was posted in the Derby Daily Telegraph on the 23rd September 1905, seven days before the launch of H.M.S. Natal.  The notice read:

“The Duchess of Devonshire, who has just returned from Aix-les-Bains, has consented to perform the ‘christening’ ceremony at the launch of H.M.S. Natal, which takes place this day week in Barrow.”

A few of these notices gave more detail about the ship.  For example, a short entry in the Edinburgh Evening News of the 23rd September 1905 said:

“In recognition of the Natal contribution (£35,000 per annum) to the Imperial Navy, it has been decided to christen a first class cruiser, to be launched on Saturday next, after the Garden Colony.  The vessel will be launched at Barrow in Furness and christened by the Duchess of Devonshire.”

However there was some disquiet being reported at the time as this piece from the Yorkshire Post of 29th September 1905 indicates:

“Invitations have been received by many colonists here to attend the launch of the twin-screw armoured cruiser of 13000 tons displacement, H.M.S. Natal, which will take place on Saturday from the yard of Messrs. Vickers, Sons and Maxim at Barrow …. H.M.S. Natal will receive this name by way of compliment to the Colony and in recognition of the contribution made by Natal to the upkeep of the Navy, as HMS Dominion has been named in honour of Canada.  I understand however, that no contribution will be made by Natal towards the furnishing of the cruiser.  The recent depression has occasioned a shortage of cash there and it is felt that the gift of £30,000 annually towards the maintenance of the Navy is so great a drain upon the limited resources of the Colony that any appeal for special gifts to HMS Natal would not be favourably received.”

Natal however did not forget H.M.S. Natal.

H.M.S. Natal was successfully launched and spent nearly a year moored on the quayside of the Devonshire Dock, where she was fitted with her engines and guns as well as all the other fixtures and fittings that were needed in such and advanced and complex warship.

The following four photographs are of HMS Natal in the Devonshire Dock whilst it was being fitted out in 1905 and 1906.  The other ship that appears in the pictures is HIJMS Katori, another cruiser being built for the Imperial Japanese Navy at the same time as HMS Natal. 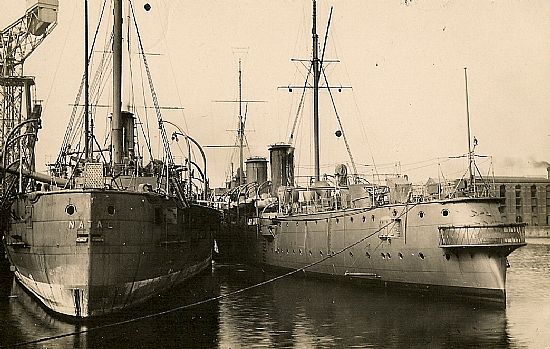 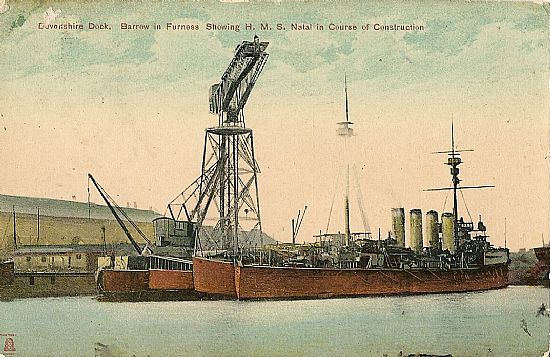 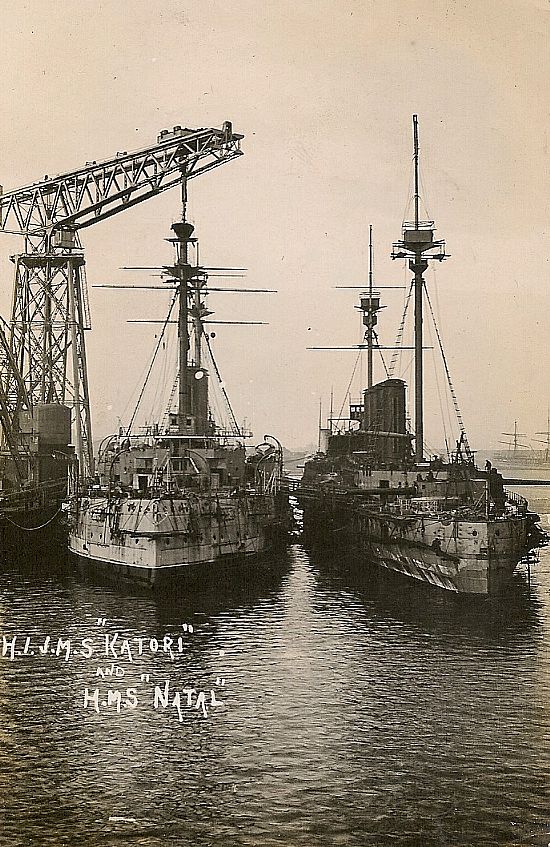 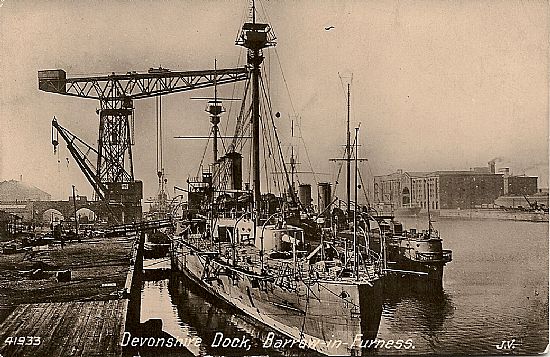